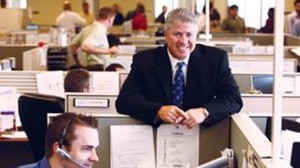 John Owens is a serial entrepreneur as Founder of the Ameritrust Companies, Showcase Baseball Academy, and Owens Management Group. His passion for the critical success factor that corporate culture plays in a company’s survival has become his mission to share with and educate other CEOs. His belief that corporate culture is at the core of a company’s potential to thrive was born out of his own experience in building his 2 billion in volume – Ameritrust Mortgage, Insurance and Wealth Management companies amidst turmoil, market unrest and unethical industry practices.

Experiencing first-hand the roller-coaster ride of his Ameritrust companies growing, struggling, and then growing again, Owens embarked on a passionate pursuit to document the secrets to enduring success regardless of what a marketplace or the economy brings. Believing in his gut and heart that corporate culture was at the core of building a company of endurance, he began his own journey of discovery in 2000, with corporate culture being his unwavering focus. His insistence on honoring corporate culture above all else is why he believes he was able to protect and nurture the Ameritrust brand, while companies all around him either imploded or lost consumer and marketplace confidence amidst the Great Recession the country experienced beginning in 2007. In 2013, he successfully sold Ameritrust Mortgage and Ameritrust Insurance, retaining the Ameritrust brand for his wealth management company.

Owens’ vision and integrity tied to corporate culture have been pivotal to achieving success in multiple enterprises. His successes resulted in demand as a management consultant to other CEOs, resulting in Owens Management being established in 2009. He brought on a research team to validate the best practices around corporate culture in 2012. The end result was the development of a corporate culture assessment tool and team building program, CURx2, which was successfully beta tested and officially introduced in 2013.

If you ask Owens what attributes to the phenomenal growth of Showcase Baseball Academy, he will proudly proclaim that it was its corporate culture being its foundation from its inception. His love of baseball began as a child, but parlayed into a baseball career as a division 1 college pitcher for Palm Beach before he transferred to take the mound for University of North Carolina at Charlotte.  In 2002, Owens started Showcase Baseball Academy (SBA) with the dream of exposing a select group of players to the best competition in the nation, while teaching an advanced level of play. The organization grew to 1500 members. In 2010, Owens decided to take his vision to another level by opening one of the largest indoor academies in baseball, where athletes can develop their leadership, life and athletic skills in order to “showcase” their talents to best serve their TEAM on the field and later, in the workforce.  Owens successfully sold SBA in 2018.

Owens attended UNC Charlotte and graduated with a BS in Economics. In spite of juggling the responsibilities of being CEO of multiple thriving companies, he makes his family a priority – enjoying quality time with his wife, Stacy, and their three children, Alexa, Nicklaus and Jack.